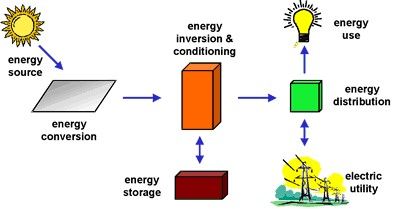 There are a number of different ways to convert solar energy into electricity. Photovoltaic solar cells are a popular method. These cells are made of two layers of silicon, one of which is negatively charged and the other positively charged. When sunlight strikes the silicon layers, the light energy causes electrons in the silicon to become loose and move around, creating an electrical current.

Photovoltaic cells convert solar energy into electricity using an electrical current and voltage. The electrons in a solar cell move toward the positive end of the cell when exposed to sunlight. To generate electricity, photon energy must be greater than the bandgap energy of the material used to make the cell. The PV cell must produce the appropriate voltage and current. The electrons are then freed by the flow of the voltage and current. The PV cell’s front surface is designed to be more open to free electrons. When two surfaces are connected via an external load, this voltage potential is converted into an electrical current.

Concentrating photovoltaic (CPV) systems can convert solar thermal power into electricity. These systems use curved mirrors to focus sunlight on small areas. This technology offers many benefits over other forms of solar power conversion, including lower costs for cell material. The technology has its limitations.

Utility-scale CSP plants are usually large, but smaller systems can be installed directly at the point of use. Single-dish systems can produce anywhere from five to 25 Kilowatts of electricity.

In the past decade, the efficiency of solar panels has improved remarkably. A new type of solar panel recently reached nearly 40 percent efficiency in the lab, and that could mean a bright future for solar electricity generation.

Solar panels use a variety of materials to convert solar energy into electricity. The most common solar cells are made of silicon, the second-most abundant element on Earth after oxygen. Its crystalline structure allows for an efficient conversion of light into electricity. Silicon is also used in computer chips.

Solar cells consist of multiple layers. The first layer is an antireflection layer, which minimizes light loss due to reflection. The second layer is a metal back contact, which conducts electricity. The layers are laminated to prevent excessive heat and moisture from affecting the solar cells.

Solar panels are made up of silicon cells, a frame made from metal, a glass casing, and wiring. They are usually installed on rooftops and large outdoor spaces. The solar cells, also known as photovoltaic cells, absorb light during the day and convert it into electricity.

Previous post : The Efficiency of Energy Transfer in a Process
Next post : Advantages and Limitations of Solar Energy